Home » Blog » From Minimalist Interior to Contemporary, by adding antiques and colour. 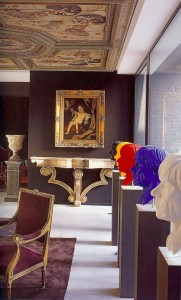 This splendidly smart interior clearly demonstrates the transformation possible from an old 1990s Minimalist apartment with no architectural features and low ceilings and big windows updated into a contemporary interior by adding colour, antiques, and new art.

In the 50s people ripped out of Victorian houses the cornices, fireplaces and modernised them. The next generation  to buy these houses in the 70s and 80s busily replaced cornices, multi-hued ceiling roses and fireplaces. The 90s and early 2000s saw the same houses denuded again, with large open extensions, giant kitchen features and picture windows to the courtyard garden. Fashion changes and now the fireplaces and cornices are going right back in.

What can one do with an austere late 20th century white box? Here is the answer.