I have always loved this story of the travels of a wrecked piece of furniture as it gradually moves up the ladder to its eventual home. The story, by the now infamous Cristopher Gibbs,  was published in 1970 in the magazine Discovering Art. It is still as good an illustration of the antiques industry as ever, the digital age notwithstanding. I have added two zeros to the numbers to approximate present day costs. The George I green lacquered bureau bookcase I have used as an  illustration is on offer from Ronald Philips Antiques, London,  and has an asking price bracket of of “£1000,000+” so two extra digits is probably about right.

“Before a good piece of furniture form an obscure house in the country reaches Bond Street, it will probably pass through five or six pairs of hands. We will imagine that the piece of furniture is a green lacquer bureau bookcase. It is of the Queen Anne period, but its condition is appalling. The mirror glass form the upper doors is cracked and perished, all the handles are gone, one of the drawers is split, and it has been standing in a loose-box for 25 years. First a knocker calls. He is an itinerant dealer who will knock on any door and offer cash for  almost anything. The knocker offer £1,800 cash for it and eventually buys it for £2000. He takes it to the nearest small dealer who is asked £7,500 for it and finally pays £6,000. The small dealer rings up the best dealer within fifty miles, who probably has a flourishing business in a converted coaching inn. This man leaps into his jaguar and an hour later has bought the bureau for £20,000.

When his prize is safely home, he sets to work on it. He replaces the missing mirror glass with two cut-down plates form an 18th century looking glass.He resurrects a set of handles form a ruined walnut chest of drawers, repairs the damaged drawer and cleans off most of the dirt. Two weeks later a clever young man from Chelsea calls in. He buys several other things and then asks if there is anything in the workshop. He is told about the green lacquered bureau bookcase, and after a lot of haggling he pays £52,000 for it. It is sent directly to the restorer who he uses in Fulham, and after a month of hard work and a series of visits to check on its progress, it is delivered to his shop in the King’s Road. It has now cost over £70,000. Into the window it goes, marked £227,500. A Bond Street dealer , who is a regular caller, sees it two days later and buys it for £180,000A month later it is sent round on approval to a lady in Eaton Square. She decides to keep it. Six months later, her husband writes out a cheque for £400,000. 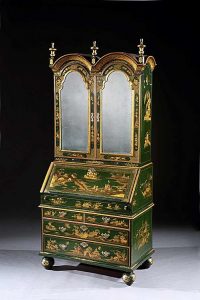