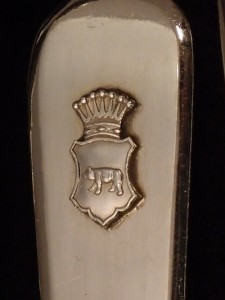 The castle was first built by the Bishop of Pilyene between 1264 and 1267. It was rebuilt in the 16th century and from 1561 until 1920 was the home of the Barons von Behr. During the 1905 Russian Revolution much of the castle was destroyed by fire. It was rebuilt, with an additional tower and yard. It was at this time that the Russian silver cutlery set, made in Riga by an unrecorded maker, initials E.D was made. It is of 84 zolotnik silver and bears the cast in relief shield of the Barons von Behr showing a bear, and surmounted with the open coronet with five pears for a Baron.

Paul Balthasar Baron Behr was born on January 6, 1892, at Mitau, Kurland. His family dates back to the 12th century and before, when the name appears as “Ursus” and “Bero” in the Nekrologium of Lüneburg. The earliest ancestor of the clan is considered to be Hugold, brother of the Bishop of Verden (1152-1162). Their estates were near Ebstorf in the District of Uelzen, Province of Hannover (1235), but soon after they moved from there, and Ulrich von Behr (1371-1406), established the Baltic family when he moved to the “Lifflenden”. His brother-in-law, Johann von Münchhausen, was Bishop of Oesel, employing von Behr as “Stiftsvogt” on the island. His sons Ulrich and Johann acquired large land holdings in Kurland, where the family found itself established from then on. 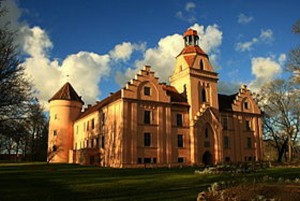 Paul Balthasar von Behr served in the Russian cavalry as Staff Captain and moved to Germany after the war. In 1926 he came to Canada, his wife following a year later. 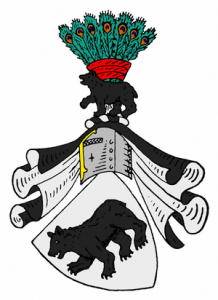 It appears it was Paul Balthazar who would have ordered the silver service.

Shortly after the war it passed to the ancient Aderkas family, and thence by descent till purchased from an Aderkas by Roy’s Antiques Pty Ltd.

← Attribution of Georges Jacob Chairs
What is Steampunk and where can I see its influence? →
Main Menu
×
MENU